Launch of the Next Generation – PS4 Review

After years’ of waiting, speculation and anticipation – the PlayStation 4 has arrived, heralding the real start of the 8th generation console war.

Heralded as a video gaming console designed ‘for the gamers’, rather than an all in one entertainment machine like it’s main competitor, Mictosoft’s Xbox One, it’s already proving to be a massive hit with consumers, with nearly 3 million consoles sold and widespread hardware shortages.

But was it worth the wait, and is it as good as the hype suggests? We find out.

Design and set up

When the PS4 was unveiled earlier in the year, we weren’t that impressed with the design – but having got hands on with the system, we’re happy to admit that we were wrong.

Sleek, modern and compact, the PS4 looks stylish and contemporary. Design wise, it’s unashamedly Sony, and clearly belongs to the same family as the PS3 and PS2. The part-matte, part-gloss finish gives the console an air of quality, and its small dimensions means that it won’t dominate your living room in the same way as the Xbox One.

In fact, it’s only when you stand it next to the Xbox One that you can truly appreciate what a good job Sony has done on design – they’ve managed to fit more powerful components and the PSU into a space half the size of Microsoft’s hulking behemoth of a console.

Set up couldn’t be easier – it uses the same cables as the PS3, and we had it out of the box and running in under 2 minutes. It doesn’t require an internet connection to play games, and they start installing as soon as you put them into the disc drive, meaning that you can be playing pretty much straight away.

When you do connect it to the internet, the PS4 does need to download a day one patch – but at 300MB, it downloads pretty quickly on a half-decent internet connection.

With 8GB of GDDR5 memory, an 8 core processor and high-end AMD Radeon GPU, it’s around 10 times as powerful as the PS3, and this translates to great gaming performance.

Whilst top spec gaming PCs will deliver slightly better graphics, there’s nothing available that compares to the PS3 at this price point.

Top of the tree graphics wise is probably Killzone, with beautiful vistas, super-detailed character models, and impressive draw distances that show glimpses of what we can expect from next gen gaming. Details, like lighting, shadows, textures and water have all taken a big step up, adding an additional layer of immersion.

Even titles ported from the previous generation have enjoyed a good facelift, and if you’ve played Assassins Creed or FIFA 14 on PS3, you’ll definitely notice the improvements.

Looking back at the difference in quality between the PS3 launch titles and the latest crop of games, it’s a promising start, and we’re looking forward to some games that really push the boundaries of what the hardware is capable of.

Smooth, streamlined and easy to navigate, the PS4 interface is a huge improvement on the PS3’s clunky navigation. From turning the console on, you’re ready to go in around 20 seconds, with recently played games being ordered for ease of selection.

At any point during a game, you can access the menu with a press of the PS button, allowing you to switch between installed games and media apps quickly and easily.

Negatives on the new interface are the What’s New section, an ugly, Facebook-lite style feed which tells you what games you and your friends have played, and what trophies you’ve earned. This section constantly sits at the bottom of the interface, and at the moment, adds nothing to the experience.

Whilst the PS4 does have web browsing capacity, it’s pretty poor, slow and frustrating to the point that you probably won’t use it much – and we hope Sony decides to improve the browser sooner rather than later.

Whilst Sony has followed Microsoft’s lead in forcing you to shell out for a yearly subscription to PlayStation Plus for online play, this could end up being a good thing.

Xbox Live was always superior to Sony’s online offering in terms of stability, security and performance, and the early indicators suggest that Sony has definitely raised its game.

With an improved interface, connectivity and loads of freebies (like the excellent games Resogun and Contrast) to sweeten the deal, it’s definitely worth £4 a month!

Navigation is good, and downloads are fast and intuitive. Often, game can be played before the download completes, as you can choose which portion of the game is downloaded first, which is great for those people with slower internet connections.

Currently, there is eve a deal on the PlayStation Store, which allows you to upgrade your current PS3 titles to their PS4 counterparts (for a small fee). All you have to do is stick the PS3 disc in to validate ownership, and you’ll be able to download the PS4 version of the game.

There’s even a PlayStation App for both Android and IOS, so you can purchase games on the go. Your console will then turn itself on and start downloading them, so they’re ready for when you get home!

For a console that claims to be ‘all about the games’, the PS4 still has a good amount of apps, streaming media services and content services available.

Sony’s Music Unlimited and Video Unlimited services provide a great selection of streaming media, and whilst currently it’s lacking some big players, like BBC iPlayer, we’re reliably informed that many more apps are on the way in the next couple of months.

Media wise, the biggest downside is that currently, the PS4 can’t play either CDs or MP3s, which seems like a strange decision, and one we expect will be addressed fairly soon.

The revamped DualShock 4 is a big improvement over its predecessor, with a series of developments that make it easier, more intuitive and more comfortable to use.

Whilst there are currently no games that really make the most of new features like the touchpad and in-built speaker (although Killzone does try), we’re excited to see what developers can come up with in the coming years.

Sharing video clips from your favourite games onto social media sites is smooth and intuitive thanks to the integrated share button, but we would have liked the option to save to a USB.

Being hyper-critical, we definitely prefer the Xbox One controller for comfort and long gaming sessions, but it’s still a big step in the right direction for Sony.

Currently, the main thing that’s letting the system down is the mediocre launch line-up. Gamers will have to wait for the big name exclusive titles like Drive Club and Uncharted, and Killzone: Shadow Fall is the only AAA title to make the launch window.

Having played Killzone, it’s a decent shooter that does a good job of showing off the power and potential of the hardware, but it’s hardly revolutionary, and to be honest, we expected a little more.

There are still plenty of great games out for the console, but most of the best titles (Assassins Creed: Black Flag, Fifa 14, Battlefield 4 and Flower) are ports from the last generation, which feature minor graphical and gameplay improvements.

There is no standout title, and none of the games look to be making the most of the hardware – so those hoping for revolutionary experiences might be better off waiting.

We were never huge fans of the original PlayStation Eye, but do like the Kinect, so we were interested to see what Sony would do with regards to motion and voice control with the PS4.

In reality, the new camera and microphone efeels like a budget version of Xbox One’s Kinect – with limited and fairly inaccurate voice functionality, and no real reason to purchase on just yet. It’s worlds away from the seamless integrated system on Microsoft’s console, and feels unnecessary.

Currently, there’s only the bundled Playroom (a glorified tech demo) and Just Dance 2014 that require the PlayStation Camera, so we think Sony were right to make it an optional extra.

Cheaper, more streamlined and more powerful than the Xbox One, there’s a lot to like about the PS4, and it is a fantastic piece of hardware.

It looks great, games run quickly and smoothly, and the console delivers what it set out to in providing a great gaming platform. Whilst currently, there are no standout games that make the PS4 a ‘must buy’, this is going to change quickly, as the AAA titles arrive in 2014.

The gamepad has been massively improved, and although the interface isn’t quite up there with the Xbox One, it’s still perfectly usable, and will come into its own as more and more applications are released in the coming year.

Get your own Free PS4

Over the past few weeks, we’ve been locked away in a darkened room, thoroughly testing the next gen consoles (it’s a tough job, but someone’s got to do it!). Check back to the blog later this month for an in depth review of the PlayStation 4’s biggest competitor – the Xbox One.

In the meantime, you can join in the fun and get your own Free PS4 or Free Xbox One by exchanging your credits over at Xpango. 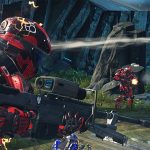 Xbox One Review – Best Xbox One Deals in 2018Gaming, Reviews